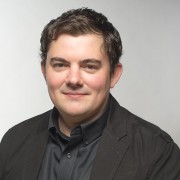 Philip Brou’s work investigates questions of identity, selfhood and the human condition.  His meticulously executed projects use a wide range of media and methodologies.  The projects form a series of interconnected narratives with subjects that include Mohamed Atta’s hotel stay on the night before he led the September 11th attacks, Space Probe Voyager 1’s journey as the farthest human-made object from our planet, the demolition of Steven Spielberg’s first childhood home, and the camouflaged role of professional background actors in cinema.

Philip lives in South Portland with his wife and fellow artist, Jennifer. When he is not in the studio working he enjoys hiking, cooking, and playing chess.