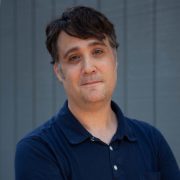 Peter Alfano joined the Maine College of Art & Design faculty as an Assistant Professor in Graphic Design in Spring 2022.

Alfano comes to the College from Ringling College of Art & Design, where he has been teaching in the Motion Design department for five years. He has also taught at both The New School’s Parsons School of Design in New York and Rhode Island School of Design.

“In Peter, we have found a colleague who brings not only the breadth and depth of his own education and experience but also one who exudes—in the classroom and out—a genuine passion for the full panoply of possibilities in Design,” said Ian Anderson, Vice President of Academic Affairs and Dean of the College. “We are very excited that Peter will be here in January to commence teaching in and contributing to the Graphic Design Program.”

In addition to Alfano’s work as an educator, he holds deep industry experience as a creative and technical lead. Alfano has produced award-winning design and animation for BBC, Google, Apple, Nike, World Science Festival, TED, AIGA, A&E, and Nickelodeon. His work spans television, film, installation, web, mobile, and print media. He has been honored by the Type Directors Club, Broadcast Design Awards, and the Art Directors Club.

Alfano holds an MFA in Graphic Design from Rhode Island School of Design as well as a BFA from Tufts University and The School of The Museum of Fine Arts, Boston.