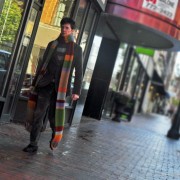 “My fine arts background and penchant for using traditional materials has led me to focus on teaching fundamentals of visual art, notably pictorial composition, constructive drawing, and careful observation.  I take a pragmatic approach to teaching picture‐making draftsmanship and crafting so that students can confidently and eloquently communicate their ideas.  Any content, message or personal or political content in the work will shine through if a student has an urge to communicate and something to say, be it client work or a political or personal message to share.  A background steeped in drawing fundamentals will allow them to tell a story in a specific, clear, and compelling way, regardless of style or content.”

Michael Connor has taught at Waynflete Summer Arts and Breakwater Creative Arts, as well as taught workshops in comics and cartooning for children and adults before joining MECA&D’s Illustration Department.  He is also a freelance illustrator whose clients have included local music acts Big Blood, id m theft able, Tom Whitehead, and Dan Knudsen, as well as international musicians Jaap Blonk and B.J Snowden.  He also exhibits his work frequently in local galleries. While he enjoys many means of image‐making, including graphite drawing, collage, painting, and assemblage, his area of expertise is black‐and‐white line art and sequential narrative, much of which has been self‐published in a zine titled Coelacanthus.  Michael also works at the local eclectic shop Strange Maine.  He earned his BFA from the University of Southern Maine.

● Author and publisher of the zine Coelacanthus for over 10 years.

Much of Michael’s time is devoted to his wife Maria and their young son, Rowan, and the small daily adventures of walks in the woods, treasure‐hunting at thrift stores, and noticing small phenomena.  He continues to immerse himself in old monster movies, classic cartoons, oddball comics, Garbage Pail Kids, MAD Magazine, old Doctor Who and Star Trek episodes, and music by Talking Heads, Frank Zappa, Shonen Knife, Kate Bush, Devo, and others.