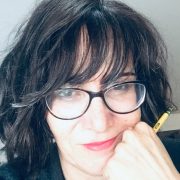 “My teaching philosophy is first to encourage students to fall in love with illustration. I believe in rigor, and by rigor I mean ‘drawing,’ and lots of it. I believe in in‐depth research. I believe students should never stop at the first idea, no matter how good it is! I believe in students having a well‐rounded education which will make them smarter and, therefore, better illustrators. I believe in getting outside, taking a walk ‐‐ leaving your portable screens behind. And lastly, by the time students become seniors, I consider myself more of a mentor to them. This is the time they need to start flying on their own ‐‐ with some guidance.”

Mary Anne Lloyd comes from a family of artists who experimented in different media, including architecture, fine art and art education. She originally intended to be a graphic designer, earning her BFA in Graphic Design from MECA&D, and worked at Lightspeed and Corey McPherson Nash, two studios in Boston, but began to notice a tendency to draw all her design projects. In 1988, she moved back to Portland and started her illustration career. Her work has primarily involved kids, family, animals, food, and handwritten typography. She has over 25 years of illustration experience and a wide and varied client list with work that ranges from editorial to advertising campaigns to branding.

Hiking is one of Mary Anne’s favorite pastimes, especially since she lives a drive away from the White Mountains, some of the most beautiful mountains on the east coast. She has traveled to Italy seven times. She has a passion for good food, is deeply concerned about climate change and protecting the environment, and her two favorite people are her husband and daughter.