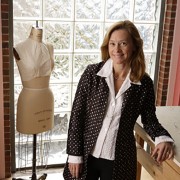 Jill McGowan is the owner of Jill McGowan, Inc., which was launched in 1994 with a signature line of women’s white shirts inspired by Jill’s work as a pattern-maker for the Hathaway Shirt Co.,  the famed menswear manufacturer. After comparing her work on men’s shirts to women’s clothing of equal price, she realized the genuine need to improve the standard of women’s clothing. She has studied at the Fashion Institute of Technology in New York, Free University in Berlin, Germany, at the University of Maine in Orono and the University of Salzburg in Austria.

Jill’s shirts and seasonal collections are now available in over 300 specialty stores around the country and her work has been featured in publications such as Women’s Wear Daily, Harper’s Bazaar, the New York Times, Victoria, Real Simple, More, and the online fashion site Daily Candy.