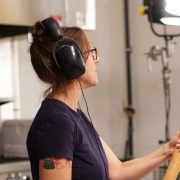 Amelia Garretson-Persans works in a variety of narrative forms including writing, filmmaking, and installation. She is interested in the intersection of psychology and visual special effects, cinematic illusion and feminism, and ghosts, generally. She received her MFA from the Maine College of Art & Design in 2016 and her BFA from Concordia University in Montreal in 2008. She has been teaching and supporting artists of all ages and abilities for over ten years in a variety of disciplines. Her particular areas of expertise and interest are stop motion animation, digital filmmaking, and multi-media installation. She lives and works in South Portland, ME with her frequent collaborator and husband, Ian P. Hundt.

Extracurricular
Writing a fantasy epic screenplay set in a mystical hospital and hanging out with two small and very cool children— Paul and Lily.