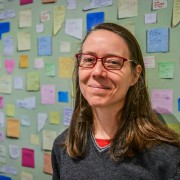 Program Chair, Printmaking & Professor of the MFA in Studio Art

Adriane Herman’s independent efforts to normalize consumption of fine art dovetail with collaborative curatorial efforts such as Slop Art and projects she has undertaken with her students at Maine College of Art and Kansas City Art Institute. Adriane holds a BA from Smith College and an MFA from the University of Wisconsin‐Madison, as well as a Level II certificate in the Wilton Method of Cake Decorating. Her work has been widely exhibited and written about in The New Yorker, Art New England, and The Kansas City Star, among other publications.  She has been a visiting artist at over 50 institutions.

Raechell Smith, from the Charlotte Street Foundation, describes Adriane as an “artist, educator, and maverick impresario . . . a bit of a shape‐shifter,” and goes on to describe her work as “sometimes serious, sometimes silly, and sometimes twisted with a hint of the trickster, but always focused with two central aims: honing a critique of contemporary culture’s fascination with consumption (art, food, experience, human memory, nostalgia, and everyday commodities) and navigating new and unplanned routes for the intersection of contemporary art and a very public, sometimes unsuspecting audience.”