What happens to history when stories are lost? And what is the artist’s role in saving and sharing stories? Students in Documentary Storytelling, a class taught by MECA&D Adjunct Instructor of Foundation Matt Frassica, worked through these questions while learning techniques for storytelling, narrative, and engagement in a partnership with the Abyssinian Meeting House on Newbury Street in Portland, Maine. This Second-Year Lab class, which is part of MECA&D’s Public Engagement curriculum, continued a long-term project and podcast in conjunction with the Abyssinian. As Professor Frassica described, “This oral history project is greater than just this class—it’s a means of connecting to the Maine African American experience, making sure the stories are heard, preserved, and honored.”

The third-oldest African American meeting house in the country, the Abyssinian was built in 1828 as a church and also served as a school and a concert hall before closing in 1917. Its members included abolitionists and leaders of the Underground Railroad. Students collected stories from the Committee for the Restoration of the Abyssinian as well as members of the African American community in greater Portland. In early October, the students —newly equipped with an understanding of story structure and the tools for engaging subjects—took a tour of the Abyssinian and began to ask questions. Frassica said the students had a profound experience: they were poignantly affected by the layers of history in the house and in their community. One student remarked that the Abyssinian was “one of the most peaceful places” they’d ever been. Others said they could really feel the presence of history. The building is currently in the process of being renovated and rebuilt; one can see these historical layers in the structure itself.

“There are not a lot of forms in which students and young people can connect to older people and ask them questions about their lives and experiences. It’s really valuable to create these kinds of connections,” Frassica noted. “Art students are learning how to use themselves as a source. This project allows students to make connections to a wider community. They’re able to use these skills of seeing themselves as part of something greater in this project in particular, but are also able to carry that knowledge forward as both citizens and artists in their own work.” Through a mix of practical skills and civic engagement, the students come away with a greater understanding of the Abyssinian’s impressive significance—for themselves and for their audiences. Their work will culminate in collected oral histories and live storytelling events in early 2018.

Other classes also developed community partnerships for studio-based learning. The students in Design Studio, a class taught by Adjunct Instructor of Graphic Design Drew Hodges, partnered with several organizations. Linked through the Maine Association for Nonprofits, MECA&D’s Graphic Design majors worked primarily with 501(c)3 organizations that had budgets under $100,000 on posters, branding, and typography projects. This connection served nonprofits who otherwise might not be able to afford specialty design services while providing students with real-world experience working with clients. Kirk Simpson ’18 reflected that the class was “both incredibly rewarding and challenging at the same time. Each student tears each project down, finding out what the audience’s needs are, what the client’s needs are, and what our own imaginations can bring.”

Drew pushed us beyond the design aesthetic and made us tap directly into the emotional connection each project and community partner needed. - Kirk Simpson ’18

Hodges founded Spot Design in 1987, which was followed by the launch of SpotCo, an innovative full-service entertainment advertising agency that has done branding work for large Broadway shows such as Rent and Hamilton. He said he modeled the class “on a working design studio with the students as designers and myself as creative director. Not every project is a nonprofit, but most are. Jessica Tomlinson, director of Artists at Work at MECA&D, has been a great help: she connected us with the nonprofits in Maine. We began by working on a 1984 reading for the organization One Book, Many Conversations. Next, we did a membership outreach for the Center for Maine Contemporary Art in Rockland. Finally, we moved forward with a poster for the D.L. Geary Brewing Company—with which MECA&D has a 16-year involvement—and worked with the Frannie Peabody Center for World AIDS Day on December 1.”

One Book, Many Conversations, a nationwide initiative that encourages dialogue by rooting it in the reading of a specific book, chose George Orwell’s 1984 for the 2017 project. The University of New England, the local sponsor for the project, selected Simpson’s design for the Southern Maine One Book, Many Conversations 1984 poster. Simpson attributed this success, in part, to his professor: “Drew pushed us beyond the design aesthetic and made us tap directly into the emotional connection each project and community partner needed. Through imagery and a strong attention to typography—and how it activated emotions—Drew brought his years of experience right to the core of what every student needed and how each one of us could successfully deliver a winning design.”

Jenna Crowder ’09 is an artist who works in installation, curating, and writing. She earned her BFA in Sculpture at MECA&D and has worked internationally on public and collaborative art projects. Jenna is currently a member of the Portland Public Art Committee and is a member artist at Pickwick Independent Press. She is the co-founding editor of the online arts journal The Chart. 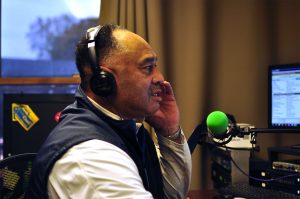 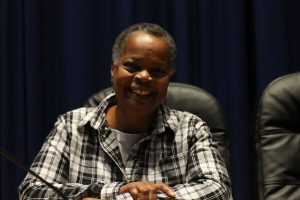 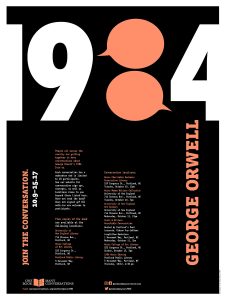 Images Above, Top to Bottom:

Students in Drew Hodges’ Design Studio class also worked with him on a rebranding project for WJZP. Jill Duson, who serves on the Portland City Council, was interviewed by students as part of MECA&D’s Documentary Storytelling class. Photo by Candice Gosta ’20.

This One Book, Many Conversations 1984 poster, designed by Kirk Simpson ’18, was selected to promote local community programming for the initiative.