Tell us a bit about your project, Shoulder Season: Shoulder Season is a project about an adult dodgeball league in Rockland, Maine. Before attending Salt Institute of Documentary Studies, I lived in the Midcoast and played in the league on a team called Hard Knox. I never got over how special it was that this rec league was able to pull so many people out of the woodwork, especially in the dreariest months of the year. At Salt I decided to do a community feature on the league for a photography assignment, and decided to keep going back every Wednesday to film. 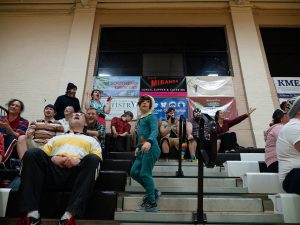 Click for full-sized image; header and thumbnail images are cropped.

I think the biggest challenge of this project was reminding myself that to be an 8-10 minute piece, the story had to be simplified. I was so wanting to have tons of characters, a foray into life outside the league, game coverage, team disputes - all the drama. But as I started editing and subsequently drowning in footage, I realized I needed to let go of some of the nuances in order to keep things clear and engaging. It's hard to kill your darlings! I am very grateful to all people who watched (many) drafts and helped me let go of things.

I'm most excited about sharing this short with people in the Midcoast area, especially the people who played in the league. Dodgeball kind of united people in the area whose lives don't usually converge, and I like the idea of coming together and celebrating a shared experience on screen. 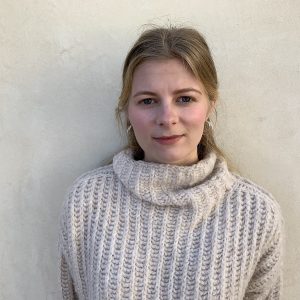 How can people follow-up or learn more about this film, and your other projects? Shoulder Season premieres at the Camden International Film Festival in September, and afterwards it will be up on my website, along with a few other projects I've worked on! Stop by hallejohns.com.

What have been your biggest takeaways from your time at Salt? One of the takeaways I most appreciate from Salt is getting into the habit of examining who you are in relation to the story you're trying to tell. It feels easy to get caught up in how best to get your story's message (or argument, or theme or whatever it is) across, and sometimes we forget to consider how our life experience, biases, interests, or beliefs might be steering the story without us knowing. Becoming more acutely aware of this, and recognizing how this positionally might present both opportunities and constraints is a challenging, but illuminating practice.

Are there any stories/projects by Salt alums that you’ve been particularly excited to see out in the world? I'm looking forward to seeing what all of my Salt classmates have been working on. Brooke Saias started producing videos at EdWeek in DC, and I can't wait to see what she makes because she has such creative intentionality and emotional thoughtfulness for every project she takes on. I know Zach St. Louis is working on a Spotify podcast about an independent artist making her first album. He has this uncanny ability to create a good rapport while maintaining his quick wit, so I have high expectations for it! Adreanna (Twiggy) Rodriguez is reporting for KALW Radio on the Winnemem Wintu tribe of Northern California as they raise awareness for the declining state of California's waterways. Twiggy is incredibly compassionate and thorough in her reporting, so I know it'll be a great final piece. They all have websites— check them out and support their good work!