I encourage my students to be curious, thoughtful explorers of life and visual culture. Participating in this process of discovery and potential is extremely rewarding.

Visitors to Joshua Reiman’s website are greeted by the enigmatic film still of a man in a suit and bow tie climbing up from the Seine river in Paris with a snorkel mask perched on the top of his head. The character is from Reiman’s film Panning for the Immaterial (2015). He is looking for the gold from Yves Klein’s 1959 seminal conceptual artwork Zones of Immaterial Pictorial Sensibility, where Klein dumped gold into the Seine as a gesture of selling a space that does not exist. The muted elegance of the image aptly reflects Joshua’s multifaceted and exploratory artistic career, which currently includes teaching at MECA&D as an Assistant Professor of the MFA in Studio Art + Sculpture. 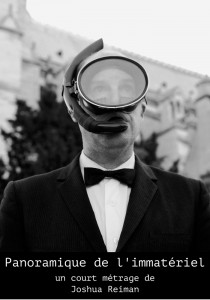 Joshua works in sculpture, film, video and photography and 2016 has already been busy, starting with the exhibit MAXIMUM MINIMUM IN UNUM, which he co-curated with Susanne Slavick at Carnegie Mellon University’s Miller Gallery, and which explored the dichotomy between“over-the-top” (Reiman) and “less is more” (Slavick). Writer Colin McFadden wrote in the online publication Dear Pittsburgh, “the works displayed are meant to eschew discrete classification. Loosely translated, it refers to the maximum and the minimum in fact of one, two sides of the same coin, exploring themes that sometimes run parallel, sometimes converge. Even the stylistic choice of articulating the exhibition in all capital letters reinforces the curatorial concept.” 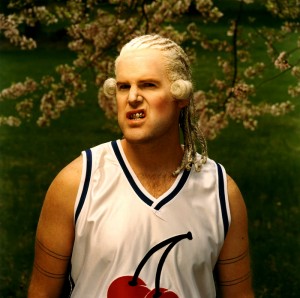 My Castle is your Home, curated by Helga Schmidhuber, opens March 12 and runs through May 1, 2016, at Nassauischer Kunstverein Wiesbaden (NKV) in Wiesbaden, Germany. The focus of the group exhibit lies in inviting people into her Helga’s “stronghold” to view artwork by colleagues and friends, whom she met during her studies at Kunstakademie Dusseldorf, or through art residencies. The exhibit includes work from four of Joshua’s films (2009-2015), and a photograph from his G. Washington (2001) series, described in an essay by Stefan Osdene as “imploring viewers to consider how notions of heroism, celebrity, and rebellion have shaped the popular culture of two distinct epochs in American history: the period of the Revolutionary War and the Hip-Hop era. Viewers are confronted by provocative images of George Washington and his compatriots wearing powdered wigs, grills (gold teeth), diamond-encrusted pendants, and customized basketball uniforms – individuals who strut around with a sense of swagger and confidence more befitting gangster rappers of the late 1990s than revolutionary leaders.” 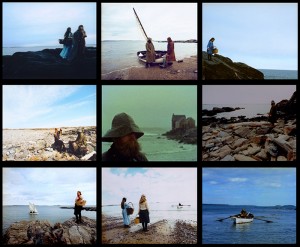 Meanwhile, The Mountain and the Bumble Bee, curated by Chris McGinnis, opens March 25 and runs through April 22, 2016 at the Pennsylvania College of Art and Design. This exhibit was inspired by a travel log by geologist and land surveyor John C. Fremont, who noted in his 1842 travel log an unlikely high-altitude encounter with a bumblebee, during which he imagines each of them to be the first of their species to brave the geological extreme of the Rocky Mountain territory. The group exhibit features Joshua’s four-channel film A Brief Inquiry (2010) and other works by contemporary artists and poets that explore notions of landscape, highlighting America’s “contradictory role as both steward and exploiter.”

Joshua’s work often uses iconic figures from art and politics to “anchor new narratives at the junction of where reality and fiction meet” and his work has been exhibited in galleries and museums across the United States, in Germany and in Estonia. Prior to joining MECA&D, Joshua was a visiting professor of art at Carnegie Mellon University where he taught sculpture, installation, and site work. Josh has an MFA in sculpture from Syracuse University and a BFA in sculpture from the Kansas City Art Institute.