My work was always instinctual. I believe in chance, thrift shops, found objects. In crafting records, for instance, I might hear an old Harry James riff and weave it into a Freddie Cannon song. The sound of someone slamming the studio door might become the hook. I view art the same. In the fifties I was close to Otto Fenn, the fashion photographer, who introduced me to Andy Warhol. We had an ongoing canasta game — Andy, Otto, Johnny Ray, and myself. Andy was decorating the windows at Bendels and displaying his wonderful shoe sketches. I was working with linen and burlap, applying resin, molding, hardening, and covering it with sand, beads, and shells. Very organic, very physical. Andy considered my stuff edgy and arranged a show at the Bodley Gallery. Reviews were strong, interest high, but in the sixties the music business shot even higher — Bob Crewe, 1968

Bob Crewe (1930–2014) was a legendary record producer and songwriter for many hit songs. One of Bob’s most known successes as producer and writer was for the Four Seasons and Frankie Valli’s solo work. The story of the Four Seasons was adapted into the musical Jersey Boys, which was performed on October 6 and 7, 2017 at Portland Ovations.

The timing provided the perfect collaboration between Maine College of Art & Design and Portland Ovations to create a special event in honor of Bob Crewe. On October 5, 2017, MECA&D hosted a gallery talk in their Bob Crewe Gallery Seeing Sound: The Life & Work of Bob Crewe.

Dan Crewe, Bob's brother, MECA&D Trustee, and President of the Crewe Foundation, was the lecturer at this special Gallery event. Having worked alongside his brother for many years as his right hand man and business partner, Dan Crewe is confident that MECA&D's Bob Crewe Program in Art and Music is the perfect way to celebrate his brother’s legacy and life-long passion in both his music career and his serious engagement to the visual arts.

In the recent article by WLBZ2 “Legendary Maine songwriter remembered with his own gallery,” Dan recalled, “My brother didn’t read music. Most people can’t figure out how he wrote all those hit songs. But he sang the songs and then he would have an arranger put them on charts."

In April 2014, the Bob Crewe Foundation awarded MECA&D $3 million dollar gift to establish a new area of study that explores the intersection between art and music. The program, working in tandem with MECA&D’s rigorous visual arts offerings, prepares students to cross traditional boundaries as musicians, sound artists, performers, and artists. 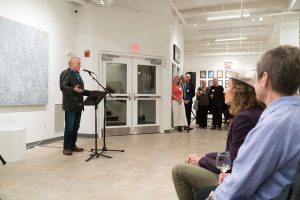 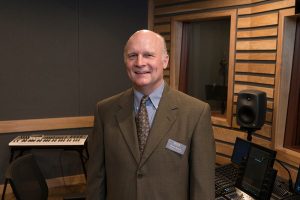 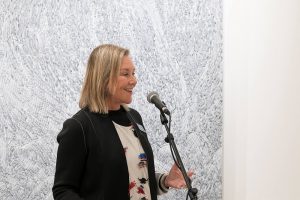 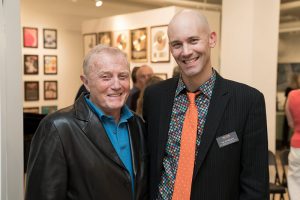 Dan Crewe and Ian Anderson, MECA&D's VP of Academic Affairs and Dean of the College 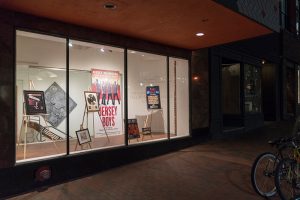 All photography by Kyle Dubay '18.