Congratulations to Ted Lott ’06 (Woodworking & Furniture Design)! Ted is featured in the October/November issue of American Craft magazine. He is one of this year’s recipients of the Shortlist Artist award in American Craft Council’s “Emerging Voices” competition. 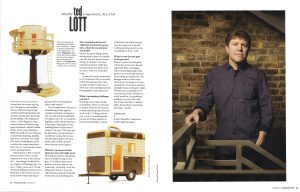 The American Craft Council introduced the Emerging Voices Awards in 2015 to recognize and celebrate the talented craft artists working today. Each Emerging Artist and Emerging Scholar receives $10,000 towards their work and research; Shortlist Artists each receive $1,000.

Born and raised on the shores of Lake Michigan, Ted Lott has resided in 12 different states and visited every one but Alaska. A sculptor, designer and craftsperson, he believes that “thinking and making are two sides of the same coin.” Since graduating from MECA, he has earned two graduate degrees from the University of Wisconsin‐Madison, worked as a furniture maker, and been an Artist‐in‐Residence at the Anderson Ranch Arts Center, Kohler Arts/Industry Program, Haystack School, Vermont Studio Center, and elsewhere, as well as widely exhibiting his work.