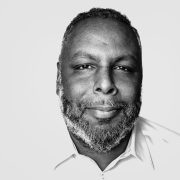 “Start where you are. Use what you have. Do what you can." - Arthur Ashe”

Reggie Hodges, also known as Reggie Burrows Hodges, is a narrative figurative painter whose work centers around visual metaphor and storytelling. He works primarily large-scale on raw canvas, wood and rag paper with acrylic and pastel — exploring themes such as identity, truth, surveillance, and often childhood memories. As method, Hodges paints from a black ground, developing the environment around the figure so it emerges from its surroundings, examining the possibility that we are all products of our environment.

Reggie majored in theatre and film at the University of Kansas and has worked in many capacities in television and film production. Reggie co-owned Bass Mind Recording Studio in Brooklyn, New York and also co-founded the reggae dub band Trumystic, for which he was a songwriter and bassist. His love of teaching originates from his experience of being a professional Tennis Coach on the USTA/ITF Pro Circuit.