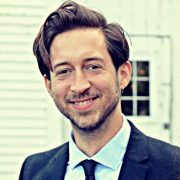 Peter Lang-Stanton is a radio producer, filmmaker, and composer living in Portland, ME. His work has been featured on BBC World Service, American Public Media, Audible Germany, and the Peabody Award-winning show, Radiolab. His feature-length radio documentary, The CIA’s Secret War in Laos, was named one of the most powerful stories of the year in BBC’s Amazing Documentaries of 2017. Pete is also a director and composer for Light Fighter Film, which has produced dozens of films all over the world, from São Paulo to Sydney Harbor, for clients such as Cirque Du Soleil, MGM Resorts, and Visit Las Vegas. His first film, Boys Camp, is a vérité documentary comedy about a failing indie rock band, and will be released later this year. Pete taught documentary film at Baxter Academy for Technology and Science. He is a Salt Alum.