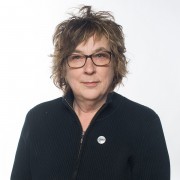 “I believe all students are capable of learning and it is my responsibility to assess each student's readiness for learning. To accommodate different learning styles, I utilize various methods to accommodate audio, visual, and kinesthetic learners. It’s of vital importance to offer students the opportunity to address their individual needs and expectations within the context of the classroom and I facilitate and encourage good communication among class participants. I'm always prepared to provide individual instruction when and if needed. It is critical to support a student’s potential by giving positive feedback for work well done in addition to detailed, constructive criticism that emphasizes strengths and encourages further exploration. I facilitate group interaction by modeling effective methods of feedback and I strive to provide a challenging, supportive environment in which students feel comfortable testing their ideas and their work.”

Kate Kaminski has been making films in Maine since the early 1990s and has been teaching filmmaking, screenwriting, and film studies for 20 years. She and partner Betsy Carson have collaborated on four DIY feature films, a 53-episode web series, and dozens of short fiction and nonfiction films that have screened all over the world. Kaminski founded the Bluestocking Film Series (2011–2018), Maine’s women in film event. She currently runs Fem.Cine.Anarchy, a popup screening event in its 5th year that celebrates women directors and women’s voices and stories; she also teaches acting on camera workshops for Audition Portland. Kaminski has a bachelor’s degree in Psychology and a master’s in Film Production.