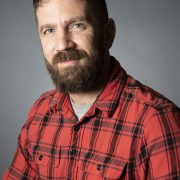 Isaac Kestenbaum is a veteran audio producer and journalist. He is the co-founder, along with Josephine Holtzman, of the production company Future Projects; they most recently created the best-selling true crime podcast Midnight Son for Audible Originals. Isaac has reported extensively on climate change in Alaska, and his work has been funded by the Arctic Circle Foundation and the Pulitzer Center for Crisis Reporting. Isaac has also worked with Vox, NPR, The Guardian US, The GroundTruth Project, AIR, and SIERRA Magazine. He has taught and led workshops for UnionDocs, UVA, NYU and Monson Arts.

He is the former Production Manager at the national oral history and radio project StoryCorps. Honors include a Peabody Award, a duPont Award, an Online News Association award and an Alaska Broadcasters “Goldie” Award. Isaac grew up on Deer Isle, Maine and has worked as a farmer, a newspaper reporter and a commercial lobsterman. He attended the Salt Institute in 2008, where he wrote about the unexpected resurgence of the sturgeon in the Penobscot River.