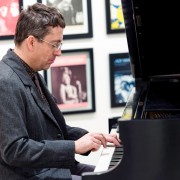 “My singular passion – my goal as a teacher – is to inspire people to find and master their own music. This may mean learning to compose, but it also often means learning to listen and apply what you hear to your instrument. Here, at my studio, most people are learning to play the piano, and we begin with a foundation of curiosity, fun, and the spirit of play.  I always seek to find music and ways of learning that are the right fit for students. Some of my students love to learn from books. Others prefer to make stuff up as they go along, and I support that by composing pieces that are on their learning level and by helping them create their own music. Still others are driven by their own repertoire of music they hear on the radio. For them, we learn to transcribe by ear and develop techniques for extending their musical imaginations beyond what they find in the media.”

Called a “master composer” by The Boston Globe for his jazz orchestra’s debut CD, First Storybook, Hans Indigo Spencer’s career includes working with theater directors, filmmakers, animators, and choreographers. He is also an educator who has been teaching music for over 20 years. Broadcast composing credits include shows on the National Geographic Channel, the History Channel, PBS, Cartoon Network, the Science Channel, and Discovery. He has created music for plays staged at Portland Stage Company, including Snow Queen, Iron Kisses, Magnetic North, and Passion of the Hausfrau. He has also underscored hundreds of improv comedy shows at Improv Boston Theater and played saxophone with bands such as the Jazz Composers Alliance Orchestra and his own Indigo Invention Group. Hans studied at Oberlin Conservatory and earned a Master’s Degree in Jazz Studies from the New England Conservatory.

The Chameleon Arts Ensemble, one of Boston’s premier classical chamber groups, regularly features his music in their family concerts, which he helps design and present. Most recently, his composition Glue blended elements from the great classical works on the concert into an original piece that included parts for the audience to play on xylophones.