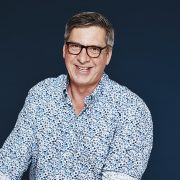 Drew Hodges is the founder of Spot Design, in 1987, which was followed by the launch of the full service New York City advertising agency SpotCo, an innovative full-service advertising agency that has focused on the theatrical industry. Along with a team of 228 collaborators, over the last 20 years SpotCo has sold over 30 million tickets to live entertainment events and created the branding and advertising campaigns for numerous Broadway shows and cultural institutions, including Rent, Chicago, The Color Purple, Kinky Boots, Avenue Q, Book of Mormon, and Hamilton, among many others. Cultural institution clients include The New York Botanical Gardens, Lincoln Center, and Carnegie Hall. In 2017, Mr. Hodges founded Drew Design Co, a design studio devoted to performing arts and culture. Current clients include Mean Girls, The Cher Show, Hamilton, and Tootsie.

Drew has taught graphic design at The School of Visual Arts, where he earned his BFA in Graphic Design in 1984, lectured at Columbia University, and served as president of the New York chapter of the American Institute of Graphic Arts/New York. He currently teaches the class Design Studio at MECA and is consulting with multiple entertainment brands.