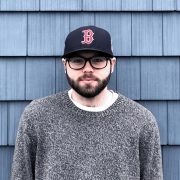 Dom Civiello is a Boston based illustrator. His work has been recognized and awarded by Communication Arts, American Illustration, Society of Illustrators, Society of Illustrators Los Angeles, Association of Illustration U.K., Applied Arts Canada, Creative Quarterly, 3x3 International, among others, and has been seen in gallery exhibits at the Museum of American Illustration, Boston City Hall, SILA Illustration West Annual show, World Illustration Awards in London, and is included in homes and private collections, as well, been featured in industry-leading publications. Dom's published illustrations have been found in a variety of markets including branding, editorial, advertising, web applications, and publishing. Some clients include Penguin Random House, Massachusetts Institute of Technology, and Mother Jones.

When he graduated from high school, he initially wanted to join the armed services but did not meet qualifications. Dom always had an interest in drawing and graphic design, but never considered it as a career path. So, instead of joining the military, he attended and earned a B.F.A. from the Massachusetts College of Art and Design. There he began exploring different fields of illustration while incorporating design and multimedia processes into his work. Upon receiving his undergraduate degree, he attended the Illustration Academy workshop in Kansas City, Missouri and then went on to earn an M.F.A. from the Hartford University Low Residency Illustration program.

Dom's illustration styles are about combining traditional techniques that are very experiential with digital techniques that are more precise. Because of this, the work can have a natural variety of textures, while still keeping the overall image focused on the narrative or idea that best solves the problem for a client. Everything he includes in a design are necessary details. He does not want to create any forms of distraction. Although his products may not seem at first glance traditionally simple. It is a simplistic mentality that allows him to bend these rules in a way that is not obvious. This process integrates fundamental design skills to create images that say the most with the least.