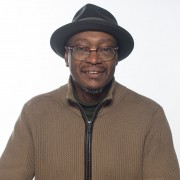 Born in Ellaville, a small rural community in southern Georgia, Daniel Minter has illustrated nine children’s books, including Ellen’s Broom, written by Kelly Starling Lyons, Seven Spools of Thread: A Kwanzaa Story by Angela Shelf Medearis, and The Riches of Oseola McCarty by Evelyn Coleman. Minter’s paintings and sculptures have also been exhibited internationally at galleries and museums including the Seattle Art Museum, the Tacoma Art Museum, Bates College, Hammonds House Museum, and the Meridian International Center.  Daniel Minter's art work is a study of memory and the many ways in which memory is embedded into our past, present, and future. It is the interconnection of time that contains the essence of what memory has left behind. These concepts are the inspiration for Daniel Minter's paintings and sculpture. Using archetypes, symbols, icons, and folklore steeped in the context of African‐American and African‐ Diaspora culture, Minter creates a visual vocabulary. Metaphors take shape out of chairs, houses, snakes, and trees, infusing the energy of emotion, action, and place to everyday life, everyday being.

Daniel Minter created the markers for the Portland Freedom Trail, which identifies significant sites related to the abolitionist movement and the Underground Railroad in Portland.  He lives in Portland with his wife, Marcia, and their son, Azari Ayindé.