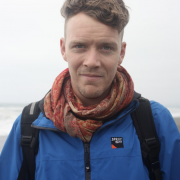 Chris was formerly a Visiting Assistant Professor in the Environmental Studies Program at Humboldt State University. Prior to that, he was a Mellon Humanities Faculty Fellow at the University of California, Irvine, where he earned a Ph.D. in Comparative Literature with emphases in Visual Studies and Critical Theory. His research and teaching interests are in environmental philosophy, environmental film and media studies, and settler-colonial studies. In addition to his Ph.D., Chris holds an MA with Distinction in Social and Political Thought from York University, Canada, and a BA with First-Class Honors in Contemporary History and Politics from the University of Sussex, England.

In his current project, Ecological Concessions: Landscape, Damage, and the Image, Chris traces two divergent responses to the problem of environmental damage: one focused on moments when diverse environmental media seems preoccupied with conceding and then working through its own relation to environmental harm; the other demonstrating that demands for visibility, legibility and perceptual orientation to crisis are often insufficient entry points into the problem of compounded, historical damage. His work considers alternative ways to think about how environmental injustice and historical violence can be perceived and resisted. He plans to finalize his book manuscript by Fall 2021.

Chris is an impressive junior scholar. His professional activities reflect his interdisciplinary profile and his interest in working in collaborative environments. In Summer 2016, he was invited to participate as a researcher in the Banff Center’s Research in Culture research group “On Energy.” Chris has several articles published or under review and is not only an active participant in his field but someone who has organized panels at multiple conferences.