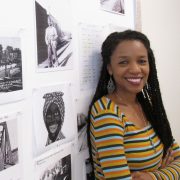 Asata Radcliffe is a writer and filmmaker. Asata received her MFA in Creative Writing from Antioch University. She writes fiction, speculative & science fiction, essays, and is a reviewer for Kirkus Reviews.

She has writing that has appeared in anthologies and literary journals including her most recent work in Dawnland Voices 2.0 and Luminescent Threads: Connections to Octavia Butler (The Collection) released by Twelfth Planet Press. Asata also serves as the Editorial Director for the 2040 Review. In 2018, she was nominated as a fellow for the first Monson Artist Residency.

Asata’s documentary and independent film work investigates the interstitial in society and the abstract in art. Her cultural film work is produced by Little Thunder Films. She is currently creating a multimedia collection of speculative/experimental installation work.