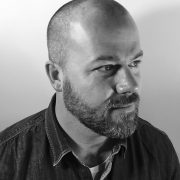 Andrew DeGraff is a freelance illustrator and artist. He grew up in upstate New York and graduated from Pratt Institute's Communications Design program with a focus in Illustration in 2001. Andrew spends most of his days creating editorial illustrations for publications along with various other illustration, publishing and gallery-based pursuits. He has recently published his second book, Cinemaps: An Atlas of 35 Great Movies from Quirk Books.

Extracurriculars
Andrew loves doing just about anything outside when he has the chance: hiking, biking, fishing, etc.