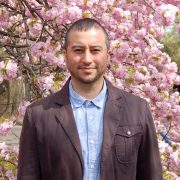 Andrés Vera Martínez is the co-author and illustrator of the award-winning graphic novel Little White Duck: A Childhood in China. The book received several starred reviews, including School Library Journal, Kirkus, and The Horned Book Magazine , and won The New York Library Best Book for Kids. Gene Luen Yang reviewed Little White Duck for the New York Times Book Review saying, “Little White Duck’ is at once innocent and sophisticated. What Liu and Martínez do is convey a child’s-eye view of a country in transition. Politics, culture and history play into their stories, but the reader’s awareness of them is a child’s awareness… Their characters are more than just pieces to be puzzled into someone else’s narrative. They’re living, breathing people.”

Andrés is currently working on the YA graphic novel Courage to Dream with national book award winner Neil Schusterman- out for Scholastic/Graphix in 2020. He also recently sold Monster Locker, a middle grade graphic novel series that he will co-write and illustrate with Jorge Aguirre to McMillan/First Second -out in 2021.