Adriane Herman, the Chair of the MFA in Studio Art, has an exhibition opening for Wreckage Salad on Saturday, July 22, from 1:00–4:00pm. The exhibition is at the Ocean House Gallery & Frame, located at 299 Ocean Road in Cape Elizabeth, Maine. The exhibition is on view until August 19; the visiting hours of the gallery are Wed–Friday, 10:00am–5:00pm; Sat, 10:00am–4:00pm. 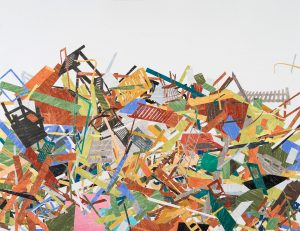 Adriane Herman’s series of monotypes entitled Wreckage Salad is collaboratively created, inspired by parti-colored piles of castoff wood, which physically dwarf, and aesthetically vie with, much contemporary art. Each print is a unique impression of an ephemeral arrangement of hand-colored shapes representing material found in the municipal woodpile in Cape Elizabeth, Maine, the artist’s home.

Testaments to tidal cycles of accumulation and release, these intimate yet anonymous heaps of barely controlled chaos materially manifest expansion, destruction, renovation, aspiration, failure, labor, entropy, and the inexorable march from birth to death, with (if we’re lucky) many trips to the dump or curb in between.

Herman has exhibited and lectured widely, and has work in the collection of the Whitney Museum of American Art in New York. She is a Professor at Maine College of Art & Design. Her ongoing collaboration called The Freeing Throwers was profiled on NPR.