Within the Landscape, Anne Ireland ’94

Events Within the Landscape, Anne Ireland ’94

Within the Landscape, Anne Ireland '94

A graduate of Bowdoin College and the Maine College of Art & Design, Anne Ireland '94 is a native New Yorker whose ties to Maine began with her father who grew up on the Eastern Promenade, Portland. Today Ireland divides her time between her Maine and Sarasota Florida studios. Ireland has been the recipient of several residency fellowships, in California, Maine and Florida. Her work has been shown in exhibitions throughout New England, most recently at St.Botolph Club, Boston and Greenhut Galleries, Portland. Ireland was profiled in Maine Home and Design in 2013 and has had her work selected for two LLBean catalog covers. She is represented by The Gallery at Somes Sound in Somesville on Mount Desert Island. In her latest work, primarily of Maine where she still lives half the year on her family’s saltwater farm in Bath, Ireland explores nature as a place deep within self. Her palette has shifted, becoming more organic and naturalistic even as her brushwork relaxes, allowing for a hint of abstraction and a greater embrace of intuition. She seeks to create the landscape she wishes to inhabit, moving away from earlier work – horizons pursued, the long view sought – in favor of something more intimate and immediate. Her intention is less to render landscape than open it and invite one to enter it. 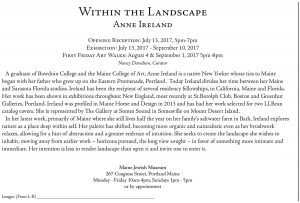