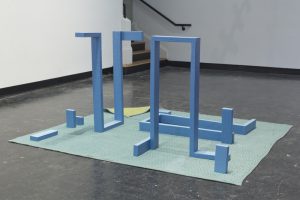 Monday, June 18, 5:30pm
Sterling Allen holds an MFA in Sculpture from the Milton Avery Graduate School of Arts at Bard College. He is a co-founder and co-director of Okay Mountain, an artist collective and former gallery based in Austin, Texas. As a solo artist and in collaboration with the group, he has exhibited, organized, and completed projects at venues throughout the United States and received several residencies including the Artpace International Artist-In-Residence Program in San Antonio, Texas. He has exhibited at numerous venues including the Contemporary Arts Museum Houston, Utah Museum of Contemporary Art, Salt Lake City, UT, the Southeastern Center for Contemporary Art, Winston-Salem, NC, and VOLTA NY. He has been twice nominated for an Art Matters Grant and was recently awarded a Rauschenberg Foundation Residency for 2019. His work is in the permanent collections of the Museum of Fine Arts, Houston and the Jack S. Blanton Museum of Art, Austin, TX. He is currently an Assistant Professor at Texas State University.