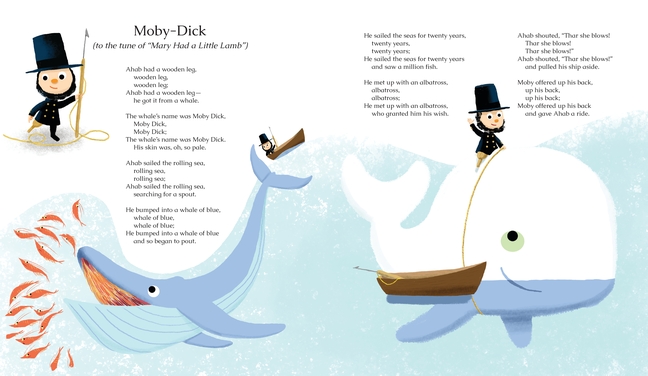 Can’t stomach all of Frankenstein? Lacking the strength to read The Odyssey? Don’t have 1,001 nights to get through Scheherazade’s ordeal? Never fear, Shrunken Treasures are here! Nine of the world’s best-known stories and books have been reduced, like slowly simmered cherries, to tart and tasty mouthfuls. Lighthearted verse turns Moby-Dick into a simple nursery song. Outrageous color makes even gloomy Hamlet seem like fun. Riotous images transform Jane Eyre’s ordeal into a whirlwind adventure. The Metamorphosis, Remembrance of Things Past, Don Quixote, and others have all been delivered from dense duty to delightful ditty in Scott Nash’s collection of hallowed classics, featuring notes about the original texts at the end.

As a founding partner of BIG BLUE DOT, Corey McPherson Nash and NASHBOX, Scott Nash has developed an expertise in the branding and creative development of products and programming for the entertainment, consumer product and publishing worlds. In addition to designing identities for Nickelodeon, PBS, ABC, Comedy Central, FX, YTV, Scott’s design clients include American Girl, Disney, Harvard University, Mattel, Milton Bradley, NFPA, The Boston Pops and From the Top.

Scott’s work as a designer and illustrator has been recognized by leading trade organizations and publications such as The Academy for The Arts and Sciences (EMMY award), PROMAX, Broadcast Designers Association, American Institute of Graphic Arts, Society of Illustrators and HOW, Communications Arts, Print and Publishers Weekly Magazines.

He has lectured widely and taught at Boston University, Northeastern University, The Art Institute of Boston. Currently, he teaches at Maine College of Art & Design, where he helped establish the illustration department.

Scott has illustrated over forty children’s books, including Saturday Night at the Dinosaur Stomp! and The Bugliest Bug by Carol Diggory Shields, Betsy, Who Cried Wolf! and Betsy, Red Hoodie by Gail Carson Levine, the series Snow Day! Beach Day! Rainy Day! and Camping Day! by Patricia Lakin as well as the Flat Stanley series by Jeff Brown.

Scott is also a writer and is the author/illustrator of TUFF FLUFF, The Case of Duckie’s Missing Brain and The High Skies Adventures of Blue Jay The Pirate. View his current projects here.