Performance: ‘The Poets and the Assassin’

Events Performance: ‘The Poets and the Assassin’

The Poets and the Assassin, a play written by Reza Jalali, will be performed at Maine College of Art & Design. 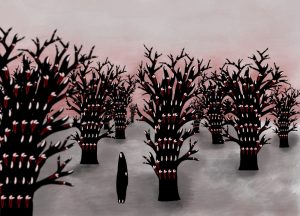 'Refuge' by Niyaz Azadikhah for Reza Jalali’s play about Iranian women, 'The Poets and the Assassin'.

"The story of Iranian women, including their century-old battle for rights, remains with the few exceptions, untold. Though they have been in the forefront of the national struggle for independence, liberty and democracy in Iran, and have been among the most educated and most independent women in the Middle East-they entered universities in 1936 and gained the right to vote in 1963-to those in the West, their lives stay, for most part, in purdah, hidden and veiled in mystery. Ironically, their tale is one of courage, resistance, sacrifice, and survival in an intensely traditional and patriarchal society, for unlike some of their sisters, in countries near and far, they have actively participated in the public sphere to protest, ask for rights, and demand equality. A myth-buster, the play helps us see them for who they are: fearless shir-zan, fighting oppressionand tyranny-a battle that can be ours, as well."

Funding provided in part by the Maine Humanities Council.