An Evening with Cartoonist Mimi Pond

An Evening with Cartoonist Mimi Pond

Join LA-based cartoonist Mimi Pond for the launch of her highly-anticipated graphic novel The Customer Is Always Wrong. Told in the same brash yet earnest style as her previous memoir Over Easy, The Customer is Always Wrong is the saga of a young naïve artist named Madge working in a restaurant of charming drunks, junkies, thieves, and creeps. Taking place in Oakland in the late seventies, Pond’s story details the trials and tribulations of Madge’s daily grind as a waitress at the Imperial Cafe. She'll be joined in conversation by local author, illustrator, and professor at MECA&D, Scott Nash.

Mimi Pond is a cartoonist, illustrator, and writer. She has created comics for the Los Angeles Times, Seventeen magazine, National Lampoon, and many other publications. She has also written for television: her credits include the first full-length episode of The Simpsons, “Simpsons Roasting on an Open Fire”, and episodes for the television shows Designing Women and Pee Wee’s Playhouse. She lives in Los Angeles with her husband, the painter Wayne White. 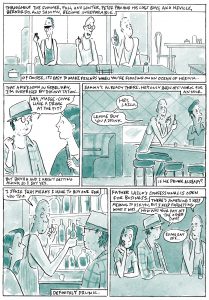