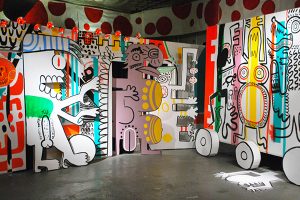 Born in 1985 in San Antonio, TX, Michael Menchaca received his BFA from Texas State University in 2011, and his MFA from the Rhode Island School of Design in 2015. He has been an Artist-in-Residence at the Skowhegan School of Painting and Sculpture (ME), Vermont Studio Center (VT), The Wassaic Project (NY), and The Studios at MASS MoCA (MA), among others. Solo shows include The Contemporary Austin (TX), The McNay Art Museum (TX), Auburn University (AL), and most recently at The Chrysler Museum of Art (VA). He was a Visual Arts Fellow at the Fine Arts Work Center from 2015 - 2016 in Provincetown, MA, and is a recipient of the 2019 National Association of Latino Arts and Cultures (NALAC) Fund for the Arts Grant. Through 2020, he is co-curating the New York/San Antonio exhibition Xicanx: New Visions with Suzy González. Menchaca lives and works in San Antonio, TX.