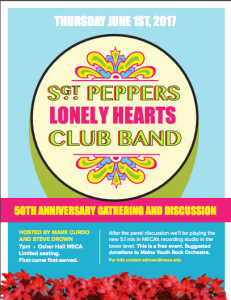 When:  Thursday June 1st at 7pm

Where:  Osher Hall at MECA&D

What:  Co-hosted by Mark Curdo and Steve Drown

A panel of Beatles fans and experts will be discussing the impact and significance of the The Beatles album, Sgt. Pepper's Lonely Hearts Club Band.  Originally released in the UK on June 1st,1967, the album set the stage for pop music and the album format to be considered as a higher art form.  On May 26th, 2017, a 6-disc box set was released by Universal Music along with single-disc, 2-disc and vinyl sets to commemorate the 50th anniversary of the release of the album.

Following a discussion of the new rerelease of the album, MECA&D will host a listening event in their recording studio in the lower level.
Special Guests & Bios:

Allan Kozinn
Allan Kozinn was a classical music critic for the New York Times – and essentially the paper’s Beatles desk – for 38 years, until he retired and moved to Portland in 2014. He now contributes reviews to the Wall Street Journal and the Portland Press Herald, and still writes occasionally for the Times. The author of two books about the Beatles – “The Beatles: From the Cavern to the Rooftop” (Phaidon, 1995) and “Got That Something!: How the Beatles’ ‘I Want to Hold Your Hand’ Changed Everything” (Times Books, 2013) – Allan is also a co-host of “Things We Said Today,” a weekly Beatles podcast.

Pat Callaghan
News anchor and reporter for WCSH6 for more than 35 years, and Beatlemaniac since 1964. A fellow who has helped make Messers Lennon, McCartney, Harrison & Starkey rich men.

Kate Beever
Kate Beever, originally from Gorham, Maine, studied at the USM School of Music and then worked for Frank Glazer before moving to New York City. She is now a Board Certified Music Therapist with a Master’s degree in Music Psychotherapy from New York University. While in New York, she interned at Beth Israel Medical Center and Memorial Sloan Kettering Cancer Center. She returned to the fresh air of Maine to open Maine Music & Health. She works with clients of all ages with cancer, autism, cerebral palsy, brain injury, depression, developmental disabilities, dementia, and respiratory diseases. Kate presents at conferences and facilitates group and individual sessions while keeping an active performing schedule as a pianist and percussionist. She is also a trained REMO HealthRhythms facilitator and has her certification in Neurologic Music Therapy.

Herb Ivy
Morning radio personality at WBLM,Herb Ivy has been rocking on The Blimp since 1985. A Member of The Maine Association of Broadcasters Hall of Fame.  He is a Trustee of the Portland Music Foundation, Secretary, and Treasurer of the Maine Association of Broadcasters and on the Marketing Committee for The Boys and Girls Clubs of Southern Maine. An avid runner, guitar player in the BLM Band, and Sox, Bruins and Patriots fan, The Captain has piloted the Blimp longer than any DJ in BLM history.

Bill O’Neil
Bill O’Neil bought his first 45 in January 1962. It was The Wanderer by Dion. A graduate of Cheverus High School in 1968 and Fairfield University, Bill first worked professionally in radio in 1972. He owned Bill O’Neil’s House Of Rock “N Roll, a music store in Saco from 1988 until 2012. Still on the radio 45 years later, he currently hosts Bill O’Neil’s Forgotten Forty Fives Sunday evenings on WWSF in Sanford and WNBP in Newburyport, Massachusetts.

Tim Tierney
Owner and manager of The Studio in Portland, ME,  Tim has been in the recording studio business for over 35 years.

Kevin Oates
Kevin Oates is the Founder and Executive Director of Maine Youth Rock Orchestra (MYRO), a non-profit organization that gives orchestral students of all ages the opportunity to perform with national touring artists. MYRO has accompanied 28 artists to date in 8 states, and have released 5 singles since MYRO’s launch in 2014. Maine Youth Rock Orchestra was the first youth orchestra to tour with a national band in history and has been part of the Annual Beatles Night in Portland since 2015.

Steve Drown
Assistant Professor and Coordinator of the Bob Crewe Program in Art & Music at MECA&D.  Steve has also been the senior engineer at The Studio for over 20 years. 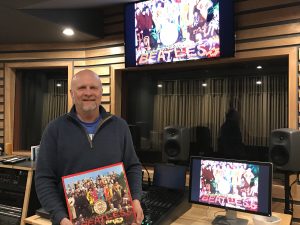