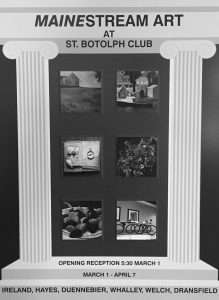 Two MECA&D Alumni are featured in the show: Anne Ireland '94 and Connie Hayes '80.

Anne Ireland grew up near New York City and, after graduating from Bowdoin College, she returned to work for CBS NEWS. While in New York, she took painting classes at the Brooklyn Museum of Art and after moving to Maine in 1985, she earned a BFA with honors from the Maine College of Art & Design. Ireland has had solo and group show all over Maine, and in 2010 and 2013 her work graced the cover of the spring and summer L.L.Bean's catalogues. In 2012, she was awarded a residency at The Studios of a Key West, Florida. Ireland's work is represented by Thos.Moser Gallery in Freeport, Maine, The Gallery at Somes Sound in Somesville (Southwest Harbor) Maine and Collier West Gallery in Brooklyn, New York.

Connie Hayes is a painter living in Rockland, Maine. She received her M.F.A. from Tyler School of Art at Temple University in Philadelphia, and Rome; her B.F.A. from the Maine College of Art & Design in Portland; and her B.A. from the University of Maine. She received a fellowship to attend the Skowhegan School of Painting and Sculpture in 1989. Born in Gardiner, Maine she taught at the Maine College of Art & Design for 10 years, also participating in arts administration there for 15 years, including serving as the interim Dean of Faculty. In 2003 she was awarded an honorary doctorate in fine arts from the Maine College of Art & Design. From 1992-1998 she lived in New York City. Since 1990 she has been painting on location through her Borrowed Views project and developing figurative work in her Rockland Studio. She serves as a member of the board of trustees for the Farnsworth Art Museum.