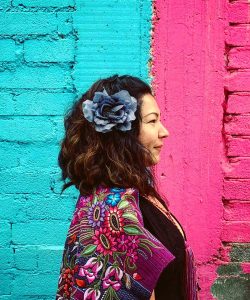 Living takes its toll and the body tells a story. Scars, hair, tattoos and blood. Fertility and waste. Self-harm and healing. Liliana Pérez-Brennan is engaged in an ongoing process of documenting stories as told by her own body as a way of taking control of her own narrative and exploring the possibilities and limitations of corporeal expression.

Pérez-Brennan received a degree in Interior Design at CEDIM (Centro de Diseño de Monterrey) and began to specialize in furniture design. She works as an independent design consultant in México City and the United States. She studied black and white analogue photography and darkroom techniques at The Gallery of Photography in Dublin, Ireland. A love for the process of developing images led her to study Printmaking, and Drawing and Visual Investigation at NCAD (National College of Art and Design) in Dublin. Upon returning to Mexico completed a lithography residency at La Ceiba Grafica in Veracruz and later studied mezzotint with Tomiyuki Sakuta. Her photographic work has appeared in Winter Papers, Abridged and The Well.

In collaboration with Mexico City-based poet, Dylan Brennan, Perez-Brennan has combined text and photography through prose poems juxtaposed against photographs as well as short fragments of text superimposed over images. She is interested in the ways an image can be transformed in the mind of the viewer and how the addition of or, indeed, subtraction of text lead an image to be read in a certain way. Unsurprisingly, in addition to poetry, advertising and online meme culture feed into this process. Contemporary media tell us how to feel and what to do on a daily basis. However, in the same way that Eisenstein, with his revolutionary concept of ideational montage, hoped to create sparks of meaning in the minds of the spectator, Pérez-Brennan aims to combine words and images in a way that is not overtly didactic or prescriptive, being more interested in the koan- like effect of these kinds of juxtapositions that may lead to quiet moments of internal reflection.