All lectures in this series are hosted in Osher Hall and are open to the public at no charge. Seating is limited. Supported in part by the Gene R. Cohen Charitable Foundation, the Isabel K. Pease Trust, and friends of the College through the Osher Chair Naming Program. Call 207.699.5010 for more information. 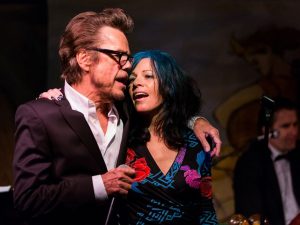 New York City rock legend David Johansen has been recognized over the years for his brilliant forays into entertainment and culture. In the 1970’s, Johansen, along with Johnny Thunders formed the seminal protopunk band the New York Dolls. Though they disbanded a few years later ("too much, too soon"), Johansen continued to follow his mantra of "adjust and create," emerging as the iconoclastic persona/performer known as Buster Poindexter, a "Rascal Pack bon vivant" known for his trademark martini glass and pompadour. With The Uptown Horns, Johansen/Poindexter performed a mixture of jazz, lounge, calpyso and novelty. He also occasionally performed with the Saturday Night Live house band.

Johansen claims that he is "neither unhappy enough to be a poet nor indifferent enough to be a philosopher, but lucid enough to be a condemned man." For several years he performed in an act called Howlin for Hubert, in which he conjured Howlin Wolf and Muddy Waters with Howlin Wolf's guitarist, the late Hubert Sumlin. He continues to write, sing, and tour with the New York Dolls as well as through solo performances in NYC’s classiest nightclubs as Buster Poindexter.

Johansen's wife Mara Hennessey has been touring and collaborating with him for many years. A writer and visual artist, Hennessey designs, produces, and art directs their performances, both at home in New York, and all over the world. She is currently working on a book based on material from her travels.