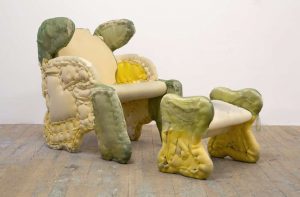 Jessi Reaves (b. 1986, Portland, Oregon; lives New York) received her BFA from the Rhode Island School of Design in Providence. Her work has been included in group exhibitions nationally and internationally, in venues including Swiss Institute, New York and A Palazzo Gallery, Brescia, Italy. In 2016, Reaves presented her first solo exhibition with Bridget Donahue, New York. She has also presented solo exhibitions a Herald St, London and was included in the 2017 Whitney Biennial and the 2019 Carnegie International.