Jared Paul will be appearing at the Institute of Contemporary Art at 6:00pm on Thursday, April 7, to coincide with National Poetry Month. Jared will perform several of his long-form performance poems, as well as discuss the context and mechanics of a life straddling DIY creativity and DIY activism. An open Question & Answer mediated by Senior Admissions Staff & Performing Artist Jason Cornell will follow.

The event is free and open to the public. 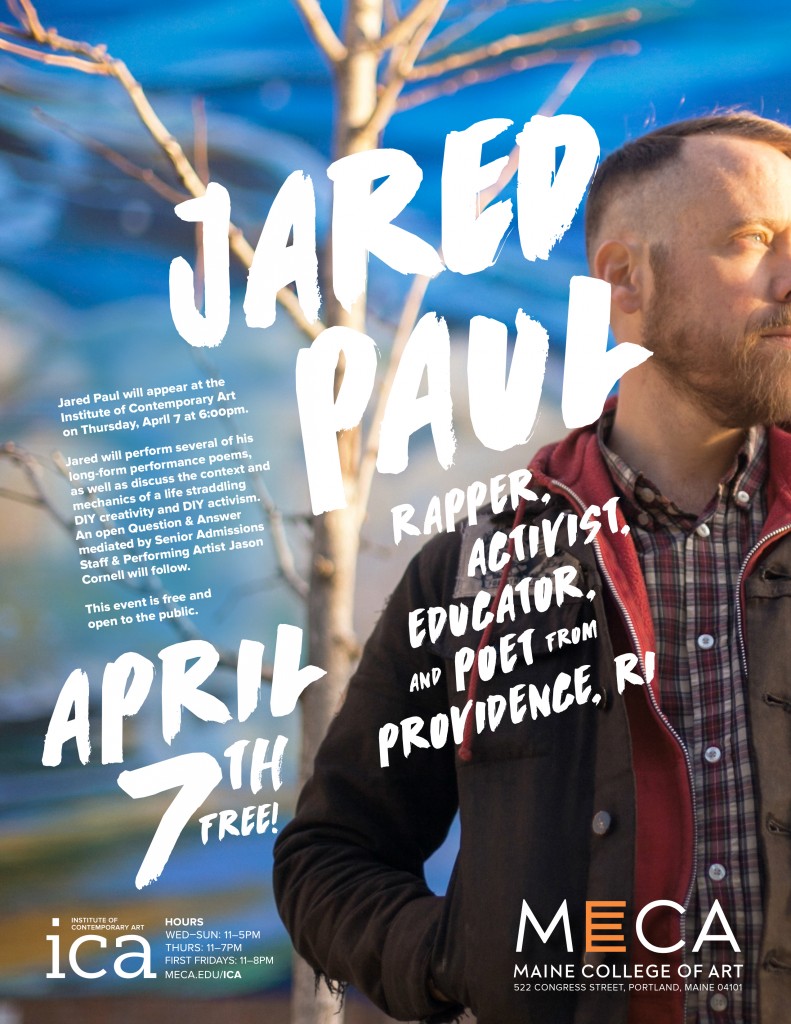 Jared Paul is a writer, performance artist, and community organizer from Providence, RI. He is a two time Individual World Poetry Slam Finalist and an eight time coach of the Providence National Youth Slam Team, which placed second in the nation at Brave New Voices 2007. Having toured throughout the U.S., Canada, and Europe, playing alongside acclaimed poets, musicians, journalists, and speakers such as Amy Goodman, Saul Williams, Our Lady Peace, Paul Hawken, Immortal Technique, Anti-Flag, and Atmosphere, Jared is widely recognized as one of the premiere performance poets in the world. His work appears in poetry collections and alternative teaching guides such as Write Bloody’s Learn Then Burn 2 and We Will Be Shelter, and UnCommon Core on Red Beard Press, as well as in the Providence Journal, Socialist Worker, Motif Magazine, Driftwood, The Agenda, and more. Jared is a TEDx presenter, and has been a featured poet at South By Southwest music festival, the Greenbuild World Expo, Netroots Nation, Post Secret, and more. In January 2014, Jared was part of the largest protest-related class action settlement in U.S. history, Schiller v. City of New York, whereby after a decade of fighting, plaintiffs and the New York Civil Liberties Union defeated the NYPD and set precedent in Federal Court against the constitutionality of “Group” Probable Cause.

"Jared Paul is a stunning performer—staring audiences in the eyes and calling for conscious responses to injustice. His talent at sharing complex ideas through verse should not be missed." — The Eureka Times Standard