Hrishikesh Hirway is a musician and designer who started making podcasts in 2014. He hosts and produces the award-winning podcast Song Exploder, where musicians take apart their songs, and piece by piece, tell the story of how they were made.

In 2016, he created The West Wing Weekly, an episode-by-episode discussion of the beloved political drama, which he co-hosts with West Wing actor Joshua Malina. In 2017, Hrishikesh helped Google launch their first original podcast, City Soundtracks, and an experimental music VR project, called Inside Music. He has also collaborated with Apple, WIRED, and Vulture. Through his shows, he has interviewed a wide range of guests, including Björk, U2, Lorde, Metallica, Canadian Prime Minister Justin Trudeau, Allison Janney, and Aaron Sorkin.

Hrishi was an artist-in residence at the Sydney Opera House, and he has spoken about creativity, music, and design at Pinterest, IDEO, Etsy, and the Google Design Conference in Los Angeles. He has a BA in Art from Yale University. 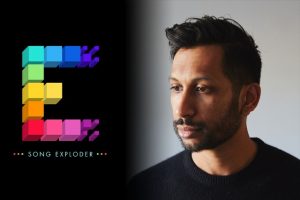