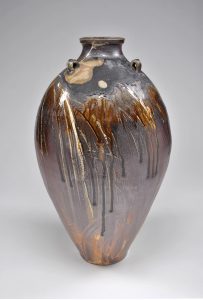 Evolving Perceptions is a showing of functional and sculptural wares that are exploring a conversation between surface, form and the ever changing perspective of functional objects. Adrian King recently worked as an apprentice to a production potter in North Carolina by the name of Mark Hewitt. There he learned to produce functional pottery at a high standard keeping with pottery traditions tied to english slipware and southern folk pottery. Since his time working in North Carolina, he has been developing a body of work that speaks of the relationship of his interests in atmospheric firing with gas and wood, and the skills and techniques he learned as an apprentice. He hopes to be able to capture the beauty of the materials used through simple yet activating surfaces that speak true to the process of the craft.