In partnership with Maine College of Art & Design and Portland Conservatory of Music, One Longfellow Square and the Armenian Cultural Association of Maine is pleased to announce an evening with Miqayel Voskanyan & Friends on April 3, 2017 at 8:00pm at One Longfellow Square. Tickets are $20 in advance and available online or by calling OLS at 207.761.1757. 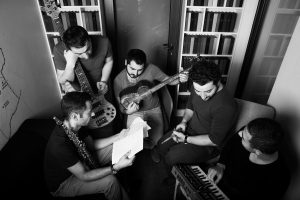 Miqayel Voskanyan & Friends Miqayel Voskanyan & Friends is a jazz-folk band based in Yerevan, Armenia. The band was formed in 2011 with the goal of introducing jazz to the tar (a folk instrument used across the Caucasus and Iran), immediately standing out as a fresh, modern sound in world music. Voskanyan takes the lead on the tar, known for its long neck and soothing tones. Although historically heard in traditional folk music, Voskanyan’s band has given the tar a new identity and, as a result, has created a new genre of music that fuses old and new to produce something wholly unique - an alluring concoction of jazz, folk, rock, and classic Armenian melodies. Miqayel Voskanyan & Friends has performed around the world, including China, Croatia, France, Georgia, Germany, Poland, South Korea, Russia, Turkey, the UEA and the USA. Their self-titled debut album was released in 2014. They are set to release their second album, Nightology, in spring 2017.

In 2013, "Miqayel Voskanyan & friends" won the "Best Band of the Year" award at the Radio Van Music Awards. In spring 2014, the band received a special invitation to perform at the Made In New York Jazz Competition Gala Concert in New York City and had the opportunity to play at the BMCC Tribeca Performing Arts Center NY with legendary jazz artists Randy Brecker and Lenny White. In the summer of the same year, the band received an invitation for representing Armenia at Caucasus Cultural Festival held in Seoul ( South Korea). After recording their debut CD album in summer of 2015,
"Miqayel Voskanyan & friends" band had the honour to represent Armenia at the MIDEM festival in Cannes, France. In August 2015, the band took part in International Ethnic Festival Krutushka at Kazan city ( Russia).

The band features Miqayel Voskanyan on tar, Arman Peshtmaljyan behind the keys, Gurgen Ghazaryan slapping the bass and Movses Ghazaryan on drums. Singer and accordionist of the Collectif Metz Basar, Sevana Tchakerian will join them on stage as a special guest.

The Armenian Cultural Association (ACA) of Maine was founded in 2003 by a group of Mainers who wished to preserve the history and culture of a unique branch of the Armenian diaspora. President of Maine’s ACA, Gerard Kiladjian, has lived in Portland since 2000 and is excited to be partnering with other Portland-based cultural institutions to bring world-class musicianship from the other side of the world to Portland. Kiladjian said, “Music has always been a universal language and way to bring people of all backgrounds together, and this group bridges a wide range of cultural and geographic inspiration. Music lovers of all ages and backgrounds will be mesmerized by Miqayel’s ability to artfully blend traditional jazz elements with traditional Armenian music.”

Maine's Armenian community is one of the oldest in America. The first immigrants arrived here in the late 19th century to escape growing persecution in Turkey. Hundreds more would arrive by the time of the Armenian Genocide in 1915. Successive waves of new immigrants and their descendants now make Maine their home.