Emily Flake began cartooning for The New Yorker in 2008, and has had more than a hundred cartoons published in the magazine since. Her cartoons and illustrations have also appeared in Mad, the New York Times, the New Statesman, the Wall Street Journal, the Globe and Mail, and in many other publications. Her book These Things Ain’t Gonna Smoke Themselves (Bloomsbury USA) was published in 2007, and she is currently working on Mama Tried, a book of essays and cartoons about parenting. 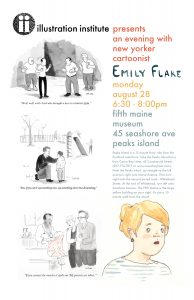