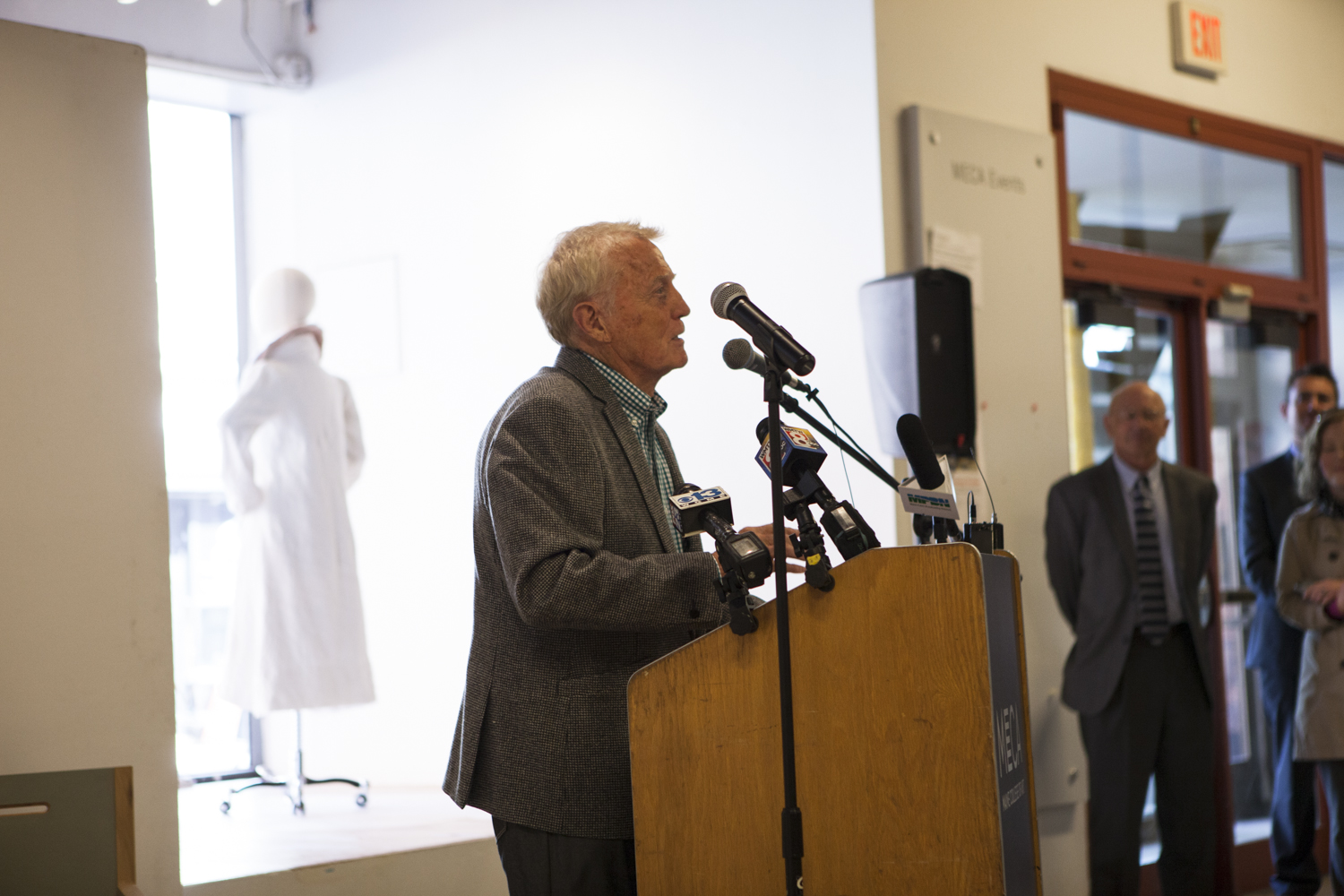 Portland, Maine ~​In April 2014, the Bob Crewe Foundation awarded MECA&D a $3,000,000 gift to establish a new area of study that explores the intersection between art and music. Since then MECA&D has been hard at work building out the lower level of the Porteous Building (522 Congress Street) to accommodate this new initiative, developing curriculum, hiring faculty and preparing to launch one of the most innovative academic programs ever conceived.

In addition to providing the first glimpse into MECA&D’s newly renovated lower level, attendees of the October 3 dedication ceremony will enjoy guided tours of the new facility, an official ribbon cutting, and special guest appearance from former musicians and industry professionals that Bob Crewe collaborated with throughout his illustrious career.

Inducted into the Songwriter’s Hall of Fame in 1985 and credited with a string of top ten hits including “Sherry,” Big Girls Don’t Cry,” and “Can’t Take My Eyes Off of You,” Bob Crewe’s influence went far beyond his contributions in the field of music composition, performance and production.

Most recently, Crewe has been featured as a supporting character (played originally by Peter Gregus) in Jersey Boys, the multiple Tony Award­winning, long­running Broadway musical based on the story of Frankie Valli & The Four Seasons that has become an international hit. Crewe is credited as the show's lyricist.

Bob’s career in the visual arts began as a student at Parsons School of Design in New York City. After art school, Bob became one of the many musicians who also used visual art as an inspiration for his music. In addition to his countless accolades in music, Crewe has also achieved recognition as an artist, having designed a number of album covers as well as having had highly successful one person gallery showings of his paintings at the Earl McGrath Gallery, Thomas Soloman's Garage and Jan Baum Gallery in Los Angeles.

Bob Crewe’s brother, Dan Crewe, has served on MECA&D’s Board of Trustees since 2011. Having worked alongside his brother for many years as his right hand man and business partner, Dan Crewe is confident that this new program is the perfect way to celebrate his brother’s legacy and life­long passion. Dan Crewe said, “I strongly believe in creativity and how different art forms interact to create something unique. I believe my brother Bob’s career demonstrates this in a powerful way. The Bob Crewe Foundation and Maine College of Art are embarking on something really special and original in academia by blending the two areas with an evolutionary design.”

Vice President of Academic Affairs and Dean of the College, Ian Anderson, is excited about the opportunity to promote the legacy of Bob Crewe to a new generation of creative entrepreneurs. According to Dean Anderson, “October 3rd marks the culmination of an immense effort that has transpired at MECA&D over the past 18 months. Thanks to the generosity and vision of the Bob Crewe Foundation, our lower level has been transformed into a state­of­the­art recording facility, classrooms and studio space. Our new recording studio will provide students a chance to learn the art of audio recording, mixing and mastering on some of the highest quality equipment found anywhere in the world.”

The curriculum will also explore a wide range of topics and subject matter relating to the interplay between music and art. A sampling of courses for the new minor include History of Contemporary Music, Applied Theory Through Composition, Music Business and Management, Ethnomusicology, and experimental courses like Sound and Color.

Dean Anderson believes that by creating curricular and co­curricular experiences for students in art and music, MECA&D can be the first art college to explicitly engage in combining the study of contemporary art and design with music. He said “MECA&D is uniquely positioned to develop this area because of our size, history and willingness to experiment.” Anderson said, “One of the things that makes MECA&D unique is its ability to combine, integrate, and synthesize multiple disciplines. I see ways in which all of our eleven undergraduate majors and two graduate programs will overlap and integrate with The Bob Crewe Program in Art and Music. This is an exciting period of growth and innovation here at the college.”

President Don Tuski Ph.D. believes this new program will have a significant impact towards reinforcing much of what makes Maine, Portland, and MECA&D a place of true distinction: excellent creative talent and a great cultural arts scene. According to Tuski, “Recognizing the integration of art and contemporary music is not something colleges or universities have engaged with directly. However, students, musicians and artists have done so for a long time and with the help of The Bob Crewe Foundation we want to facilitate this happening more in Portland, ME. We think this is a rare opportunity to make an important contribution within a new creative frontier. By consciously focusing on art and music together, new art forms can be created and MECA&D will continue to create the cutting edge of society, not just be on the cutting edge.”

For more information or to schedule an interview, please contact Raffi Der Simonian at rdersimonian@meca.edu or 207.699.5010.