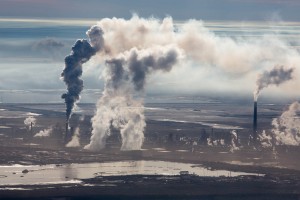 The images of the tar sands were created to bring awareness to the dirty energy that would have been transported through the Keystone XL pipeline. The extraction of bitumen and its conversion to crude oil is more carbon intense than the production of regular petroleum, resulting in greater net emissions when burned in cars and homes. By showing the processes used to extract and upgrade bitumen through open pit mines, the images reveal the magnitude of air and water pollution. Smoke and steam rising into the atmosphere represent wasted energy, and the settlement ponds filled with toxic by-products from the petroleum upgrading plants often leak into groundwater — Alex MacLean

Since 1975, pilot and photographer Alex MacLean has flown his plane over much of the United States, and has worked internationally, documenting the history and evolution of the land. Trained as an architect, MacLean’s work depicts the relationship between the natural and constructed environments, from vast agricultural patterns to city grids, recording changes brought about by human intervention and natural processes. MacLean’s photographs have been exhibited widely in the United States, Canada, Europe and Asia, and are found in private, public and university collections. He has won numerous awards, including the 2009 CORINE International Book Award for OVER: The American Landscape at the Tipping Point, the American Academy of Rome’s Prix de Rome in Landscape Architecture for 2003-2004, and is the recipient of grants from foundations such as the Pulitzer Center for Crisis Reporting, the National Endowment for the Arts, the Graham Foundation for Advanced Studies in the Fine Arts, the Massachusetts One Percent for Arts program, and the Lincoln Institute of Land Policy. Most recently, MacLean was a 2015 and 2012 fellow at the HWK Institute in Delmenhorst, Germany. He is the author/coauthor of ten books including: Up on the Roof: New York’s Hidden Skyline Spaces (2012), Chroniques Aériennes: L’art d’Alex MacLean (2010), Las Vegas|Venice (2010), OVER: The American Landscape at the Tipping Point (2008), Visualizing Density (2007), The Playbook (2006), Designs on the Land: Exploring America from the Air (2003), Above and Beyond: Visualizing Change in Small Towns and Rural Areas (2002), Taking Measures Across the American Landscape (1996) and Look at the Land; Aerial Reflections of America (1993). MacLean maintains a studio and lives in Lincoln, Massachusetts.

The Public Engagement Capstone with community-engaged component is the culminating experience for seniors in the Public Engagement Minor. Students work independently with their chosen community partner to develop a proposal and socially engaged art project that creatively addresses a local or national issue within a real world context.

Leading up to Earth Day, an interactive project space designed and facilitated by the Public Engagement Program with a focus on climate change and the environment. Visitors can participate, learn, take away, discuss and activate the ICA. Projects for all ages include screen printing poster workshops, DIY zine station, seed bomb making, panel discussions, films, and a climate change research station.