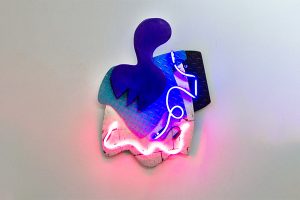 Charlie Hewitt, a prolific printmaker, painter, and sculptor, lives and works in Portland, Maine. Stylistically rooted in expressionism and surrealism, Hewitt’s art is both playful and serious, a quality he shares with artists Alexander Calder, Joan Miro, Paul Klee, and his mentor Philip Guston. Hewitt’s most important work to date is the Urban Rattle sculpture on the High Line Park in Chelsea, New York. Urban Rattle, located in the courtyard in the back of Ten23, is the only permanent artwork installed along the High Line Park. Charlie Hewitt has since installed large public Urban Rattle sculptures in Lewiston and Portland, Maine.

His imagery is largely influenced from the mill-working communities he grew up around. The energy and culture of these communities and the values of church, family, and work have infused his artwork and are the foundation of his imagery and symbols. Hewitt’s work is represented in numerous collections, including those of The Metropolitan Museum of Art, NY; Whitney Museum of American Art, NY; New York Public Library, NY; Brooklyn Museum, NY; Library of Congress, Washington, DC; and the Portland Museum of Art, ME.