Video still from: how to be alluring (After Chris Farley), part of hornylilfeminist.com, run time 16 secs, 2015, courtesy the artist and American Medium, Brooklyn.

Ann Hirsch: Sharing Love at ICA at MECA presents works by video and performance artist Ann Hirsch made over the last decade. The Los Angeles-based artist is known for her approachable and often humorous investigations into love, gender, the female body, pop culture and the internet. Hirsch’s works take myriad forms, including a video art website archive, a Youtube channel, reality TV appearances, an iOS app, paintings, and even a play. They are brought together at ICA at MECA as immersive multi-media installations.

Born in the mid-1980s, Hirsch examines the changing landscape of sexuality amidst the burgeoning web culture pre- and post-Y2K. Her works often takes the form of coming-of-age narratives of the first generation of digital natives, now in their early 30s. The app Twelve (2013), censored from the Apple store, recounts Hirsch’s preteen experience finding love with an older man in a chatroom, while her most recent work, Horny Lil Feminist (2015) is an archive of quick webcam videos riffing on ideas about gender, marriage, and online feminism. Her works, often incredibly personal, are disarming in their frankness, openly exploring aspects of sexuality that tend not to be aired in public. An early work, The Scandalishious Project (2008-09), is a Youtube channel archive of Hirsch’s online performance as the hipster “camwhore” Caroline, and has received over two million views. It is shown at the ICA at MECA as a projection with the response videos and often misogynist and anti-semitic comments it received. Here For You (Or my Brief Love Affair with Frank Maresca) (2011) features Hirsch’s intervention on the VH1 reality television program Frank the Entertainer… in a Basement Affair, in which she challenged the typecasting of her character with poop jokes. Dr. Guttman’s Office (2014-2015) comprises paintings based on childhood drawings and portrait color pencil drawings evoking feelings of body dysmorphia and emotional isolation.

Ann Hirsch was awarded a Rhizome commission for her two-person play Playground, which debuted at the New Museum and was premiered by South London Gallery at Goldsmiths College. Hirsch has been an artist-in- residence at Yaddo, Atlantic Center for the Arts, and Lower Manhattan Cultural Council. Recent solo shows include MIT List Visual Arts Center, Smart Objects, Los Angeles, and the New Museum’s online project space First Look. She is represented by American Medium in New York and Arcadia Missa in London.

Ann Hirsch: Sharing Love is curated by Karen Archey. Karen Archey is an art critic and independent curator based in New York and Berlin. With a focus on feminist practices and the intersection of art and technology, her writing is regularly featured in Frieze, Art Review, Art-Agenda. She is Editor of e-flux conversations, and a 2016 Arts Writers Grant recipient for short-form writing. 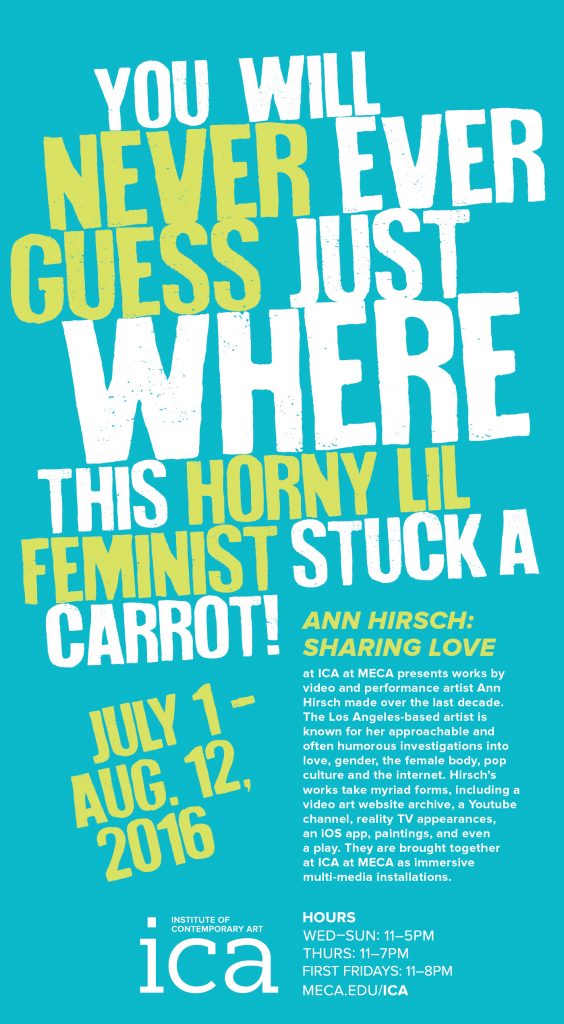