Doug Vollmer Accepted the Award from the National Marine Educators Association on June 27, 2017

Maine College of Art and The National Marine Educators Association (NMEA) are proud to announce that Doug Vollmer, former Assistant Professor in Academic Studies at MECA, is the recipient of the 2017 Outstanding Teacher Award. The award is given to a classroom educator for effective and innovative classroom teaching at any level and Doug’s decades of dedication to his work and passion for teaching coastal science made him a natural choice to receive this honor. The award was presented to him on June 27, 2017, at NMEA’s national conference in Charleston, SC, by 2016-17 NMEA President Tami Lunsford. Doug has been a formal teacher for 60 years and for the last 40 has inspired and educated MECA students as a professor of biology up until his retirement in 2016. He continues to be a passionate advocate for the preservation of the natural world. 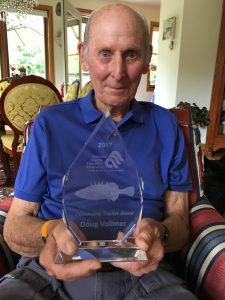 As a science professor at an arts college, Doug challenged his students not only to think and reason like a scientist, but also to use the visual world as a canvas for interpreting science through the use of art. Every year, Doug Vollmer took students on field trips to nearby rocky shores, salt marshes, and dunes as part of his Natural History of Coastal Ecosystems class.

As Doug’s colleague Bob Jenkins, who teaches math as an Associate Professor at MECA points out, “Doug connected each artist to the natural world and the issues surrounding the presentation of coastal ecosystems. He empowered students to create art, as a universal language, to convey concepts that cross into real life political and scientific arenas. Students who first entered his class fearful of ‘science’ came away with confidence, knowing that artistic expression can be a powerful tool to reflect important science issues facing society today.”

As a teenager, Doug spent summers in Maine with his family. Hours were spent collecting, examining, and photographing marine life with an amateur box camera. He has received National Science Foundation grants in Radiation Biology and Marine Biology and was a collaborative producer of the award-winning video Reading the Water: Lectures on Home Video Ecology from the Gulf of Maine, which documents the interrelationship between three generations of Vollmer men as they explore the Maine shores. Part Darwin and part Steve Erwin, but always uniquely Doug, he disciplined his students to see with clear, fresh eyes the empirical and esthetic essence of Maine’s natural environment. He leaves a legacy of dedicated pedagogy combined with a personal affectionate flair for investigating both the science and nature of art.