A number of MECA&D community members have been included in a recent artist opportunity organized by the City of Portland, Maine, through which local artists were invited to submit designs to transform local utility boxes around the city into works of art. Of the five selected artists, Jared Goulette ’11, Michael Lewis MFA ’12, and MECA&D Continuing Studies painting instructor Kerrin Parkinson were chosen. 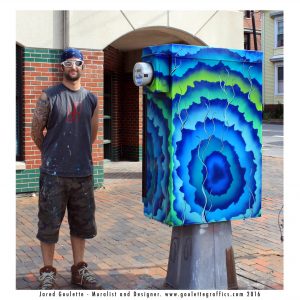 According to the City of Portland, the work is intended to “beautify the urban landscape, increase civic participation, and support the local arts community.” Similar projects have been conducted in other cities such as Burbank, CA, and Boston, MA. An open call for artists was announced in June, 2016, and a panel reviewed submissions from 12 artists.

Each artist received a $300 stipend to create their projects, which also covered the cost of all materials to adequately complete and protect the artwork. The project was led by the City of Portland Police Department and the Portland Public Art Committee, with support from NBT Bank and Port Property Management (one of the city’s largest rental property owners.)