Tavia Gilbert, who attended the Salt Institute of Documentary Studies in 2001, received a 2017 Best Female Narrator Audie Award for her narration of Be Frank With Me, by Julia Claiborne Johnson. Other nominees included Robin Miles (Another Brooklyn: A Novel), Juliet Stevenson (The Little Red Chairs), Bahni Turpin (The Underground Railroad) and celebrated actress Emma Thompson (The Turn of the Screw).

Based in Brooklyn, New York, Tavia has narrated almost 500 audiobooks, spanning categories of literary fiction, biography/memoir, fantasy, children’s literature, and science. A nine-time Audie nominee, she is also the winner of a Voice Acts Award, a ListenUp Award, and 17 Earphones Awards. 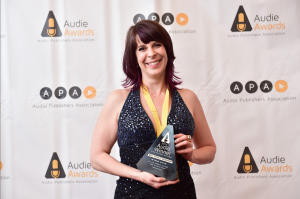 The Audio Publishers Association (APA), founded in 1986, is a nonprofit consisting of the audiobook industry and of audio publishers. As a business, they advocate for the best interests of audio publishers as well as deliver services, programs, and networking events. Every year, the APA hosts hosts an awards ceremony to celebrate the audio industry as they give away 27 various awards, in categories ranging from Best Audiobook of the Year (Hamilton: The Revolution) to Best Audio Drama (In the Embers) and Best Female Narrator (Be Frank with Me).