New Mexico artist Ellen Babcock ’84 is the lead artist behind the All Hands On banner project, which includes a parade and exhibition on Labor Day (September 5), 2016, in Portland, Maine. Following the traditional 8am breakfast at the Irish Heritage Center (IHC) with local politicians and union leaders, a small group of people will march from the IHC, down State Street to Longfellow Square, where short speeches will be given. The parade will start here, where the previous Labor Day celebration has typically ended, and will travel eastward towards City Hall. 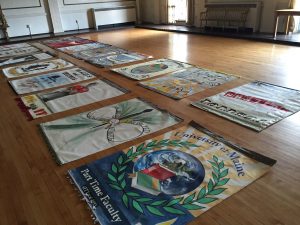 Ellen is the daughter of the late Robert H. Babcock, a labor historian who taught at the University of Maine at Orono for several decades. In the 1990’s, Professor Babcock wrote a contextual history about 17 hand-painted mid-19th century artisan banners discovered hidden away in a closet in the Maine Charitable Mechanics Association building on Congress Street. His account began:

“On a crisp autumn day in 1841, hundreds of craftsmen paraded through the streets of Portland, Maine, in a fervent display of solidarity. Marching were housewrights, masons, plasterers, and stonecutters from the building trades, and blacksmiths, machinists, coppersmiths, brass founders, and tinplate workers from among the sons of Vulcan. Shipbuilders, joiners, caulkers, pump and block makers, mast and rope makers, riggers, and sailmakers left their waterfront workshops to join the procession. Printers, hatters, tailors, tanners, curriers, and shoemakers rounded out the ranks of Portland’s sizable and self-confident artisan class. As they moved along their route, master craftsmen, journeymen, and apprentices proudly held aloft colorfully decorated silk banners, each measuring roughly 3 by 3 1/2 feet and emblazoned with ancient craft symbols, mottoes, and slogans.” 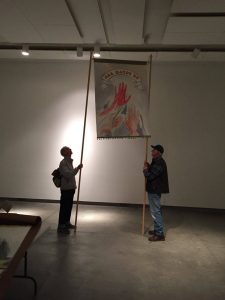 In the fall of 2015, Ellen was one of four artists featured in MECA&D’s 2015 Alumni Biennial, Residual Utopia in which she staged an exhibition that functioned as a workshop where community members of varied occupations and skills collaboratively designed new banners to be used in the 2016 Labor Day parade and to be exhibited at the Maine Mechanics Charitable Association hall.

Inspired by her father’s historical research, Ellen designed the All Hands On parade to embrace organized labor groups as well as informal labor associations. The 15 banners that will launch the parade are unified by an artistic vision that draws on a history of processions and banners specific to Portland and that include phrases from 19th century labor banners as well as collaborative designs. Participants who join the extended procession will be encouraged to dress and carry props in ways that announce their professions

“The point of the exhibition and parade is to rally diverse people under the umbrella of pride of craft, skill or occupation. It’s a way to make visible certain kinds of labor; to strengthen the bonds of worker communities; to involve many different kinds of people in a collaborative celebration.”

Ellen has exhibited sculpture and installations in a variety of venues. She assisted many internationally renowned artists as a materials researcher with the Art Foundry in Santa Fe, New Mexico before pursuing her MFA at the California College of the Arts. While in California, she completed artist residencies at Recology and the Fine Arts Museums of San Francisco. Ellen has been awarded the Cadogan Fellowship, the Dennis Leon faculty award, and the Headlands Center for the Arts studio award and became Assistant Professor of Sculpture at the University of New Mexico in 2009. She is the founder of Friends of the Orphan Signs, a collective dedicated to repair as an activity and strategy for artists that raises questions about history, appropriation, and relationships between creative construction and decay. Their projects include revitalizing the “orphaned signs” of abandoned spaces.