MECA&D Student Named Winner in Spring Into Something National Sweepstakes

Portland, ME – Natalia Lefebvre, a student at the Maine College of Art & Design, was recently selected as one of four lucky winners in Sodexo’s SPRING INTO SOMETHING NEW National Prize Sweep-stakes and will have a $2,500 donation made in her name to pay forward to the Wayside Food Programs. In addition, Lefebvre will receive a $250 Visa pre-paid card. SPRING INTO SOMETHING NEW is part of an ongoing resident dining promotion series sponsored by Sodexo, the dining services company at the Maine College of Art & Design.

Featured at more than 600 college and university campuses managed by Sodexo nationwide, SPRING INTO SOMETHING NEW created healthy, whole foods for the university’s population by offering clean and fresh fare this spring. Menu selections were focused on the healthful side of meal planning, and gave students a new frame of mind when they think of university dining. In addition to a variety of on-site activities, the SPRING INTO SOMETHING NEW National Sweep-stakes gave students the chance to enter to win one of four $2,500 donations to pay forward to a charity of their choice.

Over the last year, the MECA&D Cafe has teamed with the MECA&D Community and has spent over 80 hours volunteering at Wayside Food Programs sorting, stacking, and distributing food to the local community in the Greater Portland area. We have also contributed with donating over 150 pounds of food and over $300 in cash donations over the course of 2 years. We hope to continue our partnership with Wayside and encourage more MECA&D members to join us in our efforts to end hunger in the Portland area. 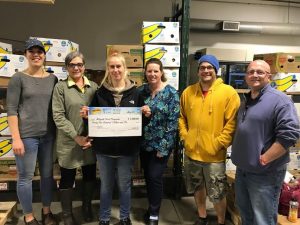